WHAT I THOUGHT I KNEW and Other Plays, by Alice Eve Cohen
Buy the book 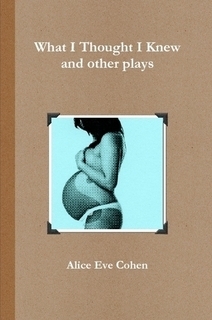 THIN WALLS, JESSICA'S CERVIX, THE PLAY THAT KNOWS WHAT YOU WANT, Published by NoPassport Press, 2016 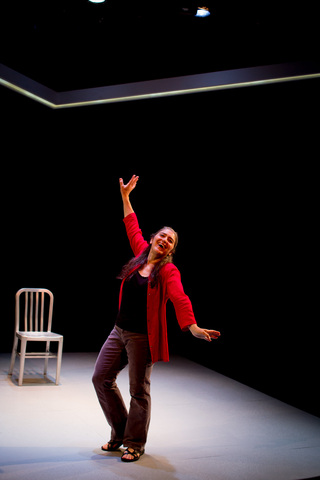 SYRACUSE POST STANDARD: Glowing "What I Thought I Knew" Warms The Kitchen's Stage
“‘A roller coaster ride with thrills, spills, laughter, 'What I Thought I Knew’ leaves us breathless… Taking effective swipes at the American healthcare system where no one apologizes...Cohen's onstage work is nearly magical." 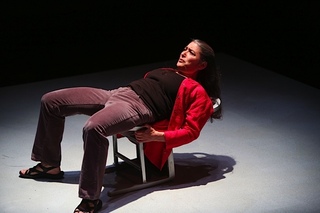 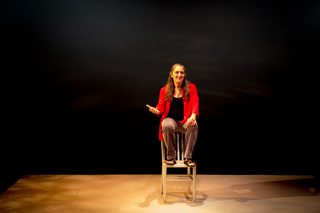 "Raucous, sad, moving and exuberantly funny." Caroline Leavitt, NYT bestselling author, critic Boston Globe, People
ITHACA JOURNAL: Kitchen's 'What I Thought I Knew' is one woman's fascinating story
“An unforgettable solo piece… fascinating, layered and disturbing. Before you know it you’re captivated, eager for the next bend in the path… There’s real danger and grief… yet dark humor spurts up like little geysers of absurdity… Astonishing.” – Ithaca Journal

“A masterpiece. The purest distillation of a life and death story, and the acting work gave full body to every metamorphosis. Astonishing, and a canonization of candor.”
—Robert Montgomery, playwright

“Alice Eve Cohen’s one woman show What I Thought I Knew, was AMAZING. Raucous, sad, moving and exuberantly funny. You can't take your eyes off Alice--or your ears away from a story of resilience in the face of everything you can think of going wrong."
Caroline Leavitt, NYT bestselling author; book critic, People, Boston Globe 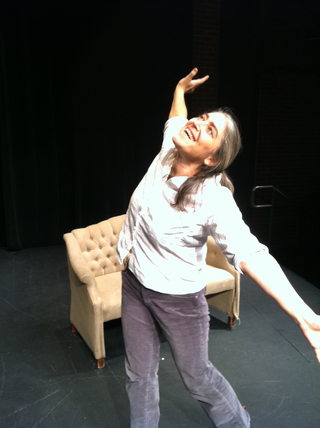 “By turns black comedy, Kafkaesque nightmare, medical mystery, and crisis of faith, What I Thought I Knew is ultimately a love story...blessed with a witty, unsentimental, utterly human voice.” –Donald Margulies, Pulitzer Prize for Drama

“A compelling and utterly unique human journey told with ruthless honesty and humor. All I kept thinking was ‘what a woman!’”
–Christine Baranski, actress

“Alice writes with humor, guts, and honesty, while spinning her unbelievable yet true tale like a master. I laughed; I cried. I crashed with her losses; I soared with her triumphs. And I was gripped through every twist and turn. Alice Eve Cohen is my new hero. I aspire to look at my own life's challenges with her kind of ferocity and heartfelt wit.”
–Jacquelyn Reingold, playwright and writer, NBC Smash, HBO In Treatment 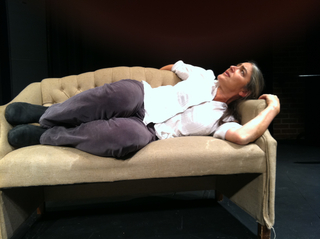 WHAT I THOUGHT I KNEW, a solo play 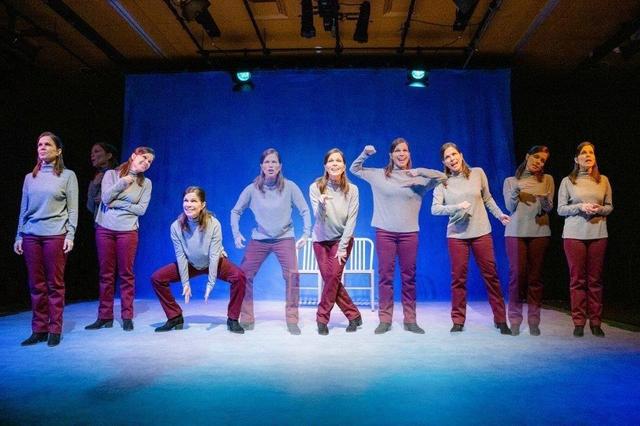 Josie DiVincenzo in What I Thought I Knew, JRT of Western NY: Ali Lou Photography

"Hilarious, heartbreaking, hopeful and devastating all at once."—Minnesota Post, The Picks

"So vivid, so immediate, so complex, so full of compassion…This is what theater can be."—Tompkins Weekly, Ithaca

"The narrative builds in layers, and as in Homer, each time our heroine escapes a crisis, she encounters a new one… The story may be imbued with the fears that plague all mortal beings, but every scene is also buoyed by hope and humor. That is the lesson of What I Thought I Knew."—Theatre Talk Buffalo 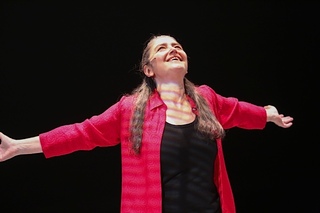 A solo play with 40 characters, based on Cohen's memoir - Oprah magazine 25 Best Books of Summer; Elle magazine's Grand Prize for Nonfiction, Salon.com Year's Best Books - the play is a riveting odyssey through doubt, a broken medical system, and the complexities of motherhood. 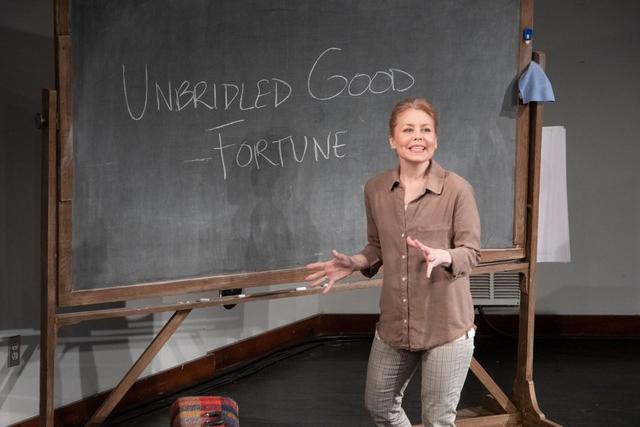 "Hilarious, heartbreaking, hopeful and devastating all at once." —Minnesota Post, THE PICKS
"This play takes us on a gripping ride."—Minnesota Star Tribune, BEST OF THE WEEK

SYNOPSIS: Alice was happy for the first time in years. After a difficult divorce, she had a new love in her life, she was raising a beloved adopted daughter, and her career was blossoming. Then, she started experiencing mysterious symptoms. After months of tests, X-rays, and inconclusive diagnoses, Alice was sent for an emergency CAT scan that revealed the truth: she was six months pregnant. At age 44, with no prenatal care and no insurance coverage for a high-risk pregnancy, Alice was besieged by opinions from doctors and friends about what was ethical, what was loving, what was right.
A dark comedy performed by one actress playing 40 roles, the play grapples with complex issues—including women’s reproductive rights and our country’s healthcare system—in a deeply personal way, inspiring public engagement and conversation across the political spectrum.

Feb 2021, AN UNEXPECTED LIFE (60 min version of What I Thought I Knew) will be produced on Jewish Repertory Theatre of Western NY's 18th season. Mainstage production, live and filmed production.

September, 2012: All For One Theatre Festival, Cherry Lane Theater, NYC

"While filled with Cohen’s characteristic warmth and humor, What I Thought I Knew indicts the health care system."—Jewish Week

JANE CHAMBERS AWARD Honorable Mention / Judges' comments:
"Judges were struck with your solo play's creative, darkly comedic and critical reframing of iconic feminist and very human questions around choice, parenting, and women's health for the stage. With wit, a compelling personal odyssey, and a panorama of vivid figures and loaded scenarios in America's landscape of reproductive culture, you hook audiences, offering new perspectives and emotional (as well as cultural) lessons on life. Thank you for sharing this adaptation of your book, and for crafting a highly-theatrical narrative that is at once highly personal and social, moving and profound. As a reflection on Life (and Death) What I Thought I Knew is challenging, beautiful, and defiantly funny."

Video What I Thought I Knew, Cherry Lane Theatre (4-min excerpt)
TOMPKINS WEEKLY: Kitchen Offers a One-Woman Tour de Force
“When the stage is at its most compelling, there is a space opened up between the actors and the audience… Rarest are those occasions when the performer sweeps you up at her first tentative pronouncements and doesn’t release you until sometime after the final applause.… Alice Eve Cohen is providing such an occasion in her current one-woman show…So vivid, so immediate, so complex, so full of compassion, so brutally honest is her retelling that it seems all of this is happening in one brief present moment… This is what theater can be. All in one body—speaking, moving, falling still—and an audience, echoing each change.”
ITHACA TIMES review:
“Mordantly funny… Cohen's genius is to tell the story in a way that makes it stick with you. And it is in reflection, after she has taken her last bow and left the stage, that you discover the pain beneath the humor.”
SYRACUSE NEW TIMES review:
“(With) its emotional variety, as well as the lightning-fast shifts in tone, not to mention the demands it puts on a single performer, What I Thought I Knew is a model for how to do this kind of thing on stage… For telling her own story, from the depths of grief to the heights of absurdity, no one can top Alice Eve Cohen.”
JEWISH WEEK article:
“While filled with Cohen’s characteristic warmth and humor, ‘What I Thought I Knew’ indicts the health care system… Throughout the play, Cohen explores various Jewish rituals and traditions, from the superstition of the Evil Eye to the mystical concept of the Book of Life, as they relate to her own psychological and spiritual journey… In an interview, Cohen told The Jewish Week that the play is a ‘fast-paced, harrowing and darkly comic story’ about a time in her life that was ‘ultimately as enlightening and spiritually awakening as it was life-shattering and surreal.’”

What I Thought I Knew, at The Kitchen Theatre, Ithaca
Performances June 12-30, 2013
Jewish Week article about What I Thought I Knew performance
Interview with Alice Eve Cohen about adapting her book for the stage
Caroline Leavitt blogspot
Finalist, O’Neill National Playwrights Conference 2012
Profile and script excerpt

“Once again you capture me with a story that grabs my heart and makes me gasp. I have been thinking about it non-stop. Thrilled this piece will have a home for a few weeks in Ithaca. ”
—Rachel Lampert, Artistic Director, The Kitchen Theatre, Ithaca, NY

“While filled with Cohen’s characteristic warmth and humor, What I Thought I Knew indicts the health care system for first misdiagnosing Cohen’s condition and then refusing to accept the liability of treating her when her pregnancy was finally revealed through an emergency CAT scan on erev Rosh HaShanah.”
—Ted Merwin, Jewish Week

“Thank you for your extraordinary story. The journey was totally compelling and riveting. I was amazed at how you inhabited each character so specifically and distinctly. And what delicious humor you have! I was laughing, crying, and outraged at our medical system. I was so moved by your humanity and all the questions, emotions, struggles, elations, colors, revelations, arrivals that you lived through during your journey.”
—Dawn Saito, performance artist/actress, writer

OKLAHOMA SAMOVAR, winner of 2021 National Jewish Plays Project: In 1887, 2 Latvian teenagers flee Russia and become the only Jews in the Oklahoma Land Run. A century later, their daughter reinvents their story, aided by ghosts, blintzes and strong Russian tea.

THIN WALLS: One building. A city in upheaval. A solo play about twelve lives colliding. "Gripping" New York Times “A little show, but with such a big, embracing heart.”

–The Guardian, London
IN THE CERVIX OF OTHERS, a full-length play.

SOLO SHOWS FOR FAMILY AUDIENCES
“Spellbinding…Our audiences were enraptured.”DTW, Family Matters
“It was probably the funniest show I have ever seen!”—Daniel, age 7

A comic play for family audiences, performed by 2 actors playing dozens of roles (and rolls)

A collection of 3 plays, by Alice Eve Cohen, Judy Tate, and Saviana Stanescu, that tackle racism, classism and misogyny in the Suffrage movement and today.