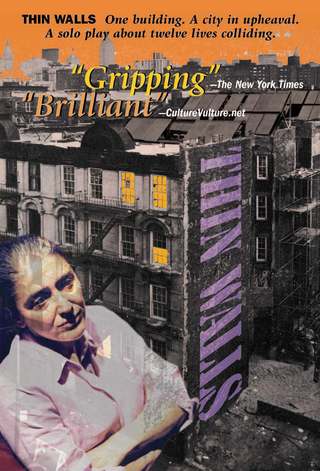 "A little show, but with such a big, embracing heart. It is as if the thin walls of the apartment block are giving up their secrets, and in the process ghosts walk." --The Guardian, London "Ms. Cohen has created and performs the most exciting, touching and beautifully developed one-person show I have seen in a long time. In the course of 37 scenes she creates an entire world, virtually melding her imagination with the audience’s such that the experience of this play is consistently much more than meets the eye." --Gay City News "A beautiful show... The rich, humane quality of the writing, and its final moving tribute to the all-embracing energy of New York life, is enough to hold the audience spellbound, right to the end." --The Scotsman, Edinburgh

Read THIN WALLS, in this collection of plays, Published by NoPassport Press, 2016

A scene from WHAT I THOUGHT I KNEW, at Univ of Michigan

Thin Walls and other plays

Plays by Alice Eve Cohen on NPX include: Oklahoma Samovar, What I Thought I Knew, In the Cervix of Others, Mrs. Satan & The Nasty Woman

THIN WALLS: One building. A city in upheaval. A solo play about twelve lives colliding. Set in a century-old New York City residential hotel, once elegant and now run-down, the darkly humorous and deeply moving play interweaves the stories of the building’s long-term residents, its recent arrivals, and its ghosts, as the end of the 20th Century approaches.

In a tour-de-force performance, writer and performer Alice Eve Cohen portrays a dozen disparate characters, including a fifty-year-old drug dealer and his haunted wife, a beautician from Trinidad, a Polish handy-man, a one-time hippy turned banker and his teenaged son, and a young Israeli cellist.

As seen through the eyes of a young woman who has just moved in, the play zeroes in on twelve eclectic neighbors over a ten-year period, as their lives collide in comic, tragic and violent ways. The intimate play draws the audience inside the thin walls of the building to reveal the explosive relationships that are forced when people of such different stripes live together under one roof.
....................................................

"The play is a haunting, thrilling act of witness. Cohen has a mastery of inflection, cadence and physicality, with an eye for searing detail that rivals that of Anna Deveare Smith, plus a nose for offbeat humor that would delight Lily Tomlin. ....The play shimmers in memory like a hot New York City summer night." - Ithaca Times

"She so thoroughly, yet quietly, becomes each person that not only her stance shifts but her face itself transforms. It's an understated, fascinating performance that brings you quite close to these challenged lives you might otherwise never encounter... This straightforward handling of her material is what makes both Cohen's narrative and performance so compelling." - Ithaca Journal

"One feels, even in the darkest characters, Cohen’s determination to pay homage to what is most human in them. It is, furthermore, a testament to Cohen’s subtle writing that, at its darkest, the play still feels buoyant, and at its lightest, the play still offers weighty fodder for the thoughtful audience member." - Tompkins Weekly

"Thin Walls has twelve characters but a cast of only one. Fortunately, that one is not just an excellent playwright but also a brilliant actor... A real play with multiple plot lines and a dozen fascinating characters... she slips from one character into another with absolutely clear transitions that border on the magical."

"A mesmeric solo performance... she has brilliantly transformed the story of her life in the Upper West Side building into a play, in which she plays a dozen characters in over 41 scenes."

"As the play progresses, she allows the relationships and conflicts to gradually emerge... Cohen translates herself from one character to another with ease."

"In this remarkable one-woman tour de force written and performed by Alice Eve Cohen... chance encounters in half-lit hallways and in the lobby add layer after layer to a chiaroscuro of intersecting connections that emerge from the shadows, flicker briefly, then just as quickly melt away to be replaced by another."

In the Cervix of Others
Oklahoma Samovar

Days of Awe
Hannah and the Hollow Challah
Without Heroes
What I Thought I Knew
Thin Walls
Jessica's Cervix
The Parrot
The Balinese Frog Prince
Book of Truth, Book of Lies
Goliath on 74th Street vs. the Woman Who Loved Vegetables
The Animator
The Play that Knows What You Want